A Very Faint Line on a Pregnancy Test: Pregnant or Not Pregnant?

Taking a home pregnancy test is easy, right? Two pink lines mean 'pregnant' and one pink line means 'not pregnant'. How much easier could it get? But here you are at the end of your cycle anxiously waiting for the results of your test, and there is only a faint line. Now what does that mean? Are your eyes playing tricks on you? Are you pregnant or aren't you?

Does a Faint Line on a Pregnancy Test Mean 'Positive'?

In most cases, if the manufacturers' instructions were followed properly, a faint line indicates a positive pregnancy test. Generally, any line that shows up is a result of HCG being detected in your urine. If you are unsure whether you're seeing a faint line or for further confirmation, it is a good idea to take a second test in a day or two. 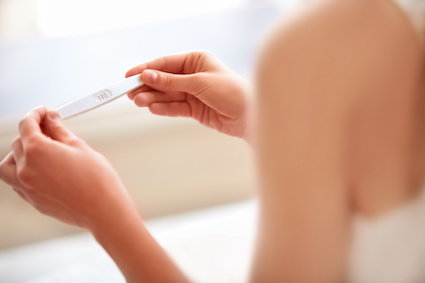 Testing too early. Testing too early is one of the most common reasons for not getting accurate or clear results from a home pregnancy test. Home pregnancy tests determine pregnancy by detecting the levels of HCG (Human Chorionic Gonadotropin) in your urine. During the first few weeks of pregnancy, HCG levels in a woman's body double every two to three days. A few days can make a big difference in how much HCG is detected in your urine. Testing should be done no earlier than ten days after ovulation or ideally right after your missed period.

Another common problem with testing is miscalculating when your period is due. BBT charting and writing down your cycle dates can help with any confusion.

Make sure to check the expiration date on your pregnancy test as well as the storage instructions. An expired test or improperly stored pregnancy test may not work accurately.

An evaporation line is caused by urine evaporating from a pregnancy test. The line results in the area where a positive result would normally be seen. Evaporation lines generally do not have any color to them. They look more like a shadow.

A chemical pregnancy is a pregnancy that produces HCG but does not develop into normal pregnancy. It is a term used to describe a very early miscarriage.

Certain medications, such as thorazine and fertility medications that contain HCG, may cause a false positive or a faint line on a home pregnancy test. If you're taking these types of medications, it is best to confirm pregnancy with your doctor.

Think you might be pregnant? Use JM's Due Date Calculator to find your due date!