In the final weeks of pregnancy, an expectant mother’s body begins its natural preparation for labor and delivery. Among the early signs of labor are effacement and dilation, important changes that occur to the cervix and work together to make it possible for the baby to safely and smoothly transition out of its mother’s uterus.

What Is Cervical Effacement?

When a woman isn’t pregnant, as well as during most of her pregnancy, her cervix is long and thick. In actual measurements, a normal cervix is not long, only 3-5 centimeters (1-2 inches) in length. In the final weeks of pregnancy, as the lower part of the uterus gets ready for the baby to be birthed, the cervix starts to get shorter and thinner. This process is called effacement. As the cervix becomes more and more effaced, it gets shorter and shorter and increasingly “pulled up,” eventually seeming to become part of the lower uterus (the cervix itself almost seems to disappear). Effacement is also sometimes referred to as “ripening” or “thinning out.”

As the due date nears, the baby’s head drops down and the mother’s uterus begins to contract; this, combined with effacement and dilation can cause pressure and cramp-like pains. Women, especially those experiencing their first pregnancies, might think this means they’re going into active labor, but these “false labor” or Braxton Hicks contractions are just early signs that the process has begun. It usually takes several weeks for the cervix to become fully effaced. (If a woman is having her first baby, her cervix will probably efface before it dilates; in subsequent pregnancies, the cervix may dilate first, then efface.)

During the final weeks of pregnancy, your health care provider will examine the cervix and can report on these changes. Cervical effacement is measured in percentages – e.g., no changes means 0% effaced or when the cervix is half its normal thickness, it’s 50% effaced. When the cervix is 100% effaced, that means it’s completely thinned out, leaving just the opening at the bottom of the uterus for the baby to come out.

What is Cervical Dilation? 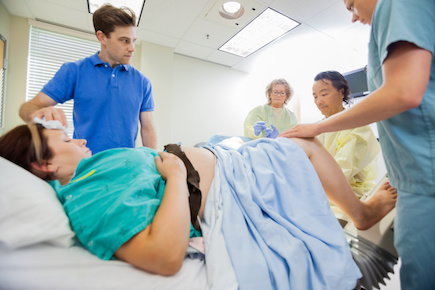 As the cervix effaces and thins out, it also begins to stretch and open. This is called dilation. This widening and opening makes it easier for the baby’s head and the rest of its body to pass through from the uterus into the vaginal canal for delivery.

The degree of dilation is measured in centimeters. For most of your pregnancy, the cervix will be at zero centimeters, closed and not at all dilated, keeping the baby safe and growing inside. During active labor, your health care provider will measure the level of dilation by inserting a gloved finger into your vagina. Sometimes dilation is also referred to in “fingers,” based on the manual exam, e.g., “she’s two fingers dilated.” One finger is the rough equivalent of one centimeter, but this is a more subjective measure, since finger size varies, especially between male and female examiners.

The progression of labor is measured by the advancing dilation of the expectant mother’s cervix. It’s generally estimated that the cervix will dilate one centimeter during each hour of labor, but this cannot be generalized for every woman or every pregnancy. Between 0-4 centimeters dilation is considered early labor, and it’s not uncommon for a woman to be up to 2 centimeters dilated several weeks before giving birth. Dilation of 4-7 centimeters occurs during active labor, and 7-10 centimeters is the transition phase (shift from active labor to the final phase, delivery). When your cervix is at 10 centimeters (about the size of a newborn’s head), it’s considered fully dilated, and you’re ready to give birth.