10 Awesome Elf on the Shelf Ideas

Here we are again! The most wonderful time of the year. A time steeped in tradition and ritual, memories and festivities. The kids love hefting down the Christmas bins, unearthing the decorations and tacking up the lights. You love it, too, (mostly) but on top of the extra mess in the house, you have the annual Christmas party, the work party, the Christmas cards, and The List. (Gosh. We're exhausted just typing that out.) You only have a few short years with your kids, such a short span while the wonder is alive and the season glimmers with excitement. How do you pull together a festive season while still enjoying it AND making memories with your kids? Enter Elf on the Shelf. While he may not be the Savior of the Season, he can be a fun little imp to keep your spirits bright. Planning his antics may be just the dose of Christmas spirit you need this year.

To help you out, we've collected 10 awesome Elf on the Shelf ideas to get your season going right, whether you're an Elf newbie or a long-seasoned Elf veteran.

1. Elf Hanging a Sock. As soon as you have your Christmas stockings hung, balance Elf on the mantel with one of your children's socks in hand and a thumb tack nearby, attempting to hang the sock at the end of the line of stockings. Extra credit: Add a Sharpie beside him to write his name on the sock. 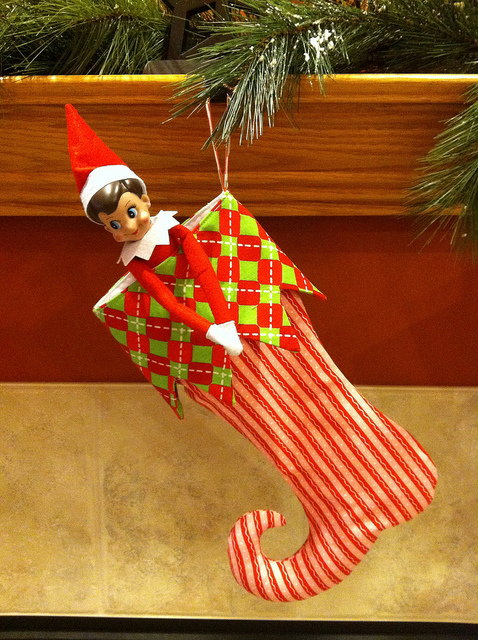 2. Elf in the Freezer. Santa may be a North Pole guy, but is Elf? Let the kids decide. Pose Elf in the freezer, and if you live in a part of the world with snow, form mini snowballs in a stack beside him. Extra credit: make a teeny sign (think construction paper on a toothpick) that says “North Pole”and prop it beside him.

3. Elf Reads. Put all your Christmas books in one place next to a comfy chair or on the end of the couch. Prop Elf on top of the stack, with a book open beside him to “read”. Extra credit: Barbie or mini-American girl doll glasses on the end of his nose. 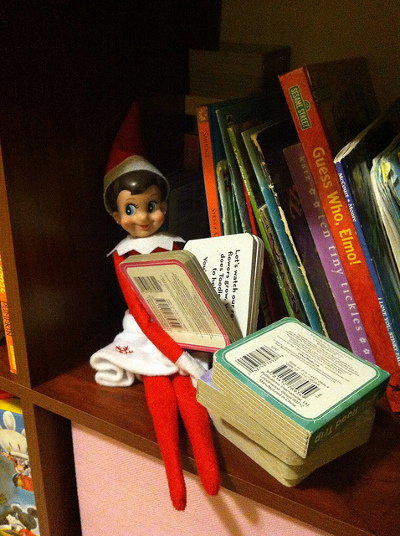 4. Elf in the Nog. Beside an opened carton of Egg Nog in the fridge, lean Elf. “Paint” his upper lip with a bit of the nog to look like he was hitting the Christmas sauce! Extra credit: place a Lego or Playmobil cup next to him in the fridge.

5. Elf on a Bed of Marshmallows. On the kitchen table, arrange a “bed” of large marshmallows, and then position Elf on top of it “asleep”. Extra credit: Put a wash cloth or dish rag on top of Elf for a “blanket”.

6. Elf with Ear Plugs. Take two Q-tips and double stick tape them to Elf's ears, then prop him alongside a speaker or musical instrument, as if the noise was too much for him. Especially effective if you have a teen in the house!

7. Elf Nestled in the Bath Towels. Another napping place for Elf: on top of a pile of towels in the linen closet, in the towel basket in the bathroom, or snuggled in between two towels. Extra credit: Cut out tiny Z's in black construction paper and lay them out beside him.

8. Elf Tucked in Beside a Kid. What kid wouldn't feel loved to wake up with Elf snuggled in beside him on his pillow? Or, maybe it would be a fun, startling surprise? Surprise either way!

9. Elf on the Toilet. Of course, at some point in the Christmas season, Elf will need to find his way to the toilet, right? Because social media demands it. Extra credit: a peppermint poop! (Gross AND hilarious!) 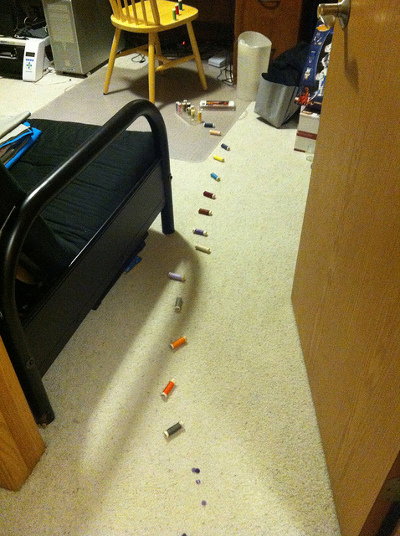 10 Elf Scavenger Hunt. And to top off Elf's adventures, or to change it up in the middle of the season, send your seekers on a scavenger hunt to find Elf. Even 3 or 4 clues to discover his whereabouts will be festive, such as: Where would Elf be if his pants were dirty? (Kids run down to the laundry.) or Where will we find Elf if he fell off his shelf? (In a basket on the floor, a pile of toys, under the dog bed, etc.) Extra credit: rhyming words!

If your holiday is in need of a little de-stressing (whose isn't?), mix in some of these Elf on the Shelf ideas and keep the memory-making rolling!