Boys and Guns: When Boys' Games Get Aggressive 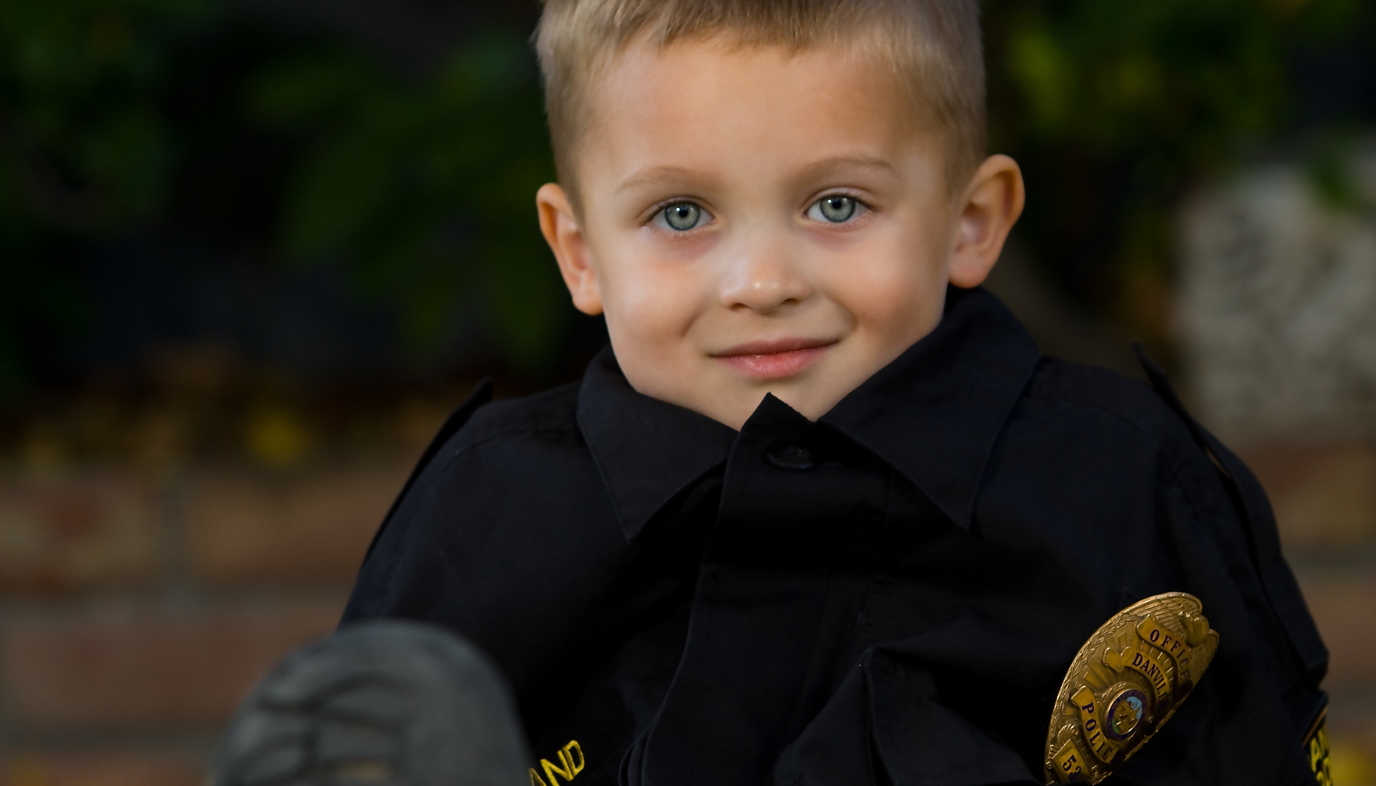 No matter how they are raised or what situations they are exposed to, young boys seem to have an almost universal interest in gunplay. Even boys who grow up in the most anti-gun households – or boys who grow up surrounded by their sisters’ toys – are drawn to shoot-em-up games. We’ve heard of parents who forbade toy guns in the house and their boys went on to fashion weapons out of graham crackers, toast, celery sticks, or even Barbie dolls bent into an L-shape. How bad is it to have boys who are fascinated by guns? And how much war-play is too much?

For starters, it helps to understand why boys choose gunplay. Some psychologists believe that it allows them to channel their natural aggression and helps them sort out – on a primal level – their understanding of good versus evil. Another hypothesis is that it gives them an important feeling of control at a time when they feel confused, overwhelmed, or powerless. One recent study even suggests that “a boy who does not have access to fantasy play with guns or other symbols of power is working under a deficit…missing out on one common way…in which the boys learn the difference between real and stylized aggression, between real violence and fantasy violence.” 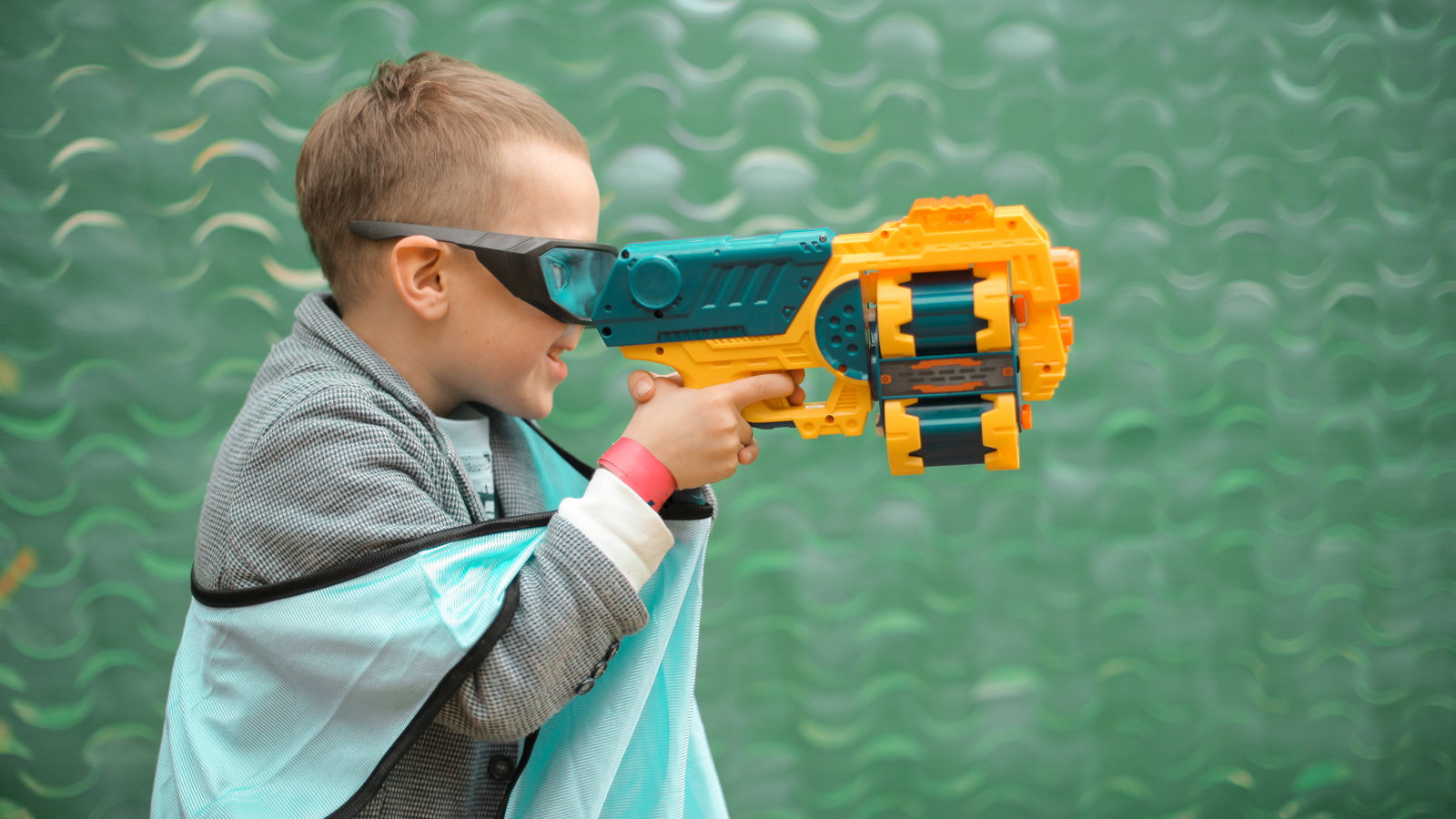 But parents and schools generally frown on toy guns and gunplay, especially after the 1999 Columbine massacre and other school shooting incidents. Additionally, some experts fear that violent video games allow children to blur the distinction between fantasy and reality. And let’s face it, if you bring a bunch of toy guns to the park, you’re probably going to be shunned by the other parents. That’s why if you have boys who are repeatedly drawn to gunplay, it helps to set some reasonable limits and channel their enthusiasm in a more positive way.

Draw the line at real-looking guns. If they want to fight with carrot sticks, celery sticks, or sticks they find in the backyard, let them do it. Their imagination will carry them away, and before you know it, those celery sticks might turn into drumsticks or batons or magic wands. Just don’t give in to their demands to have play guns that look like real guns (or guns that shoot anything like rubber bands that could hurt someone). 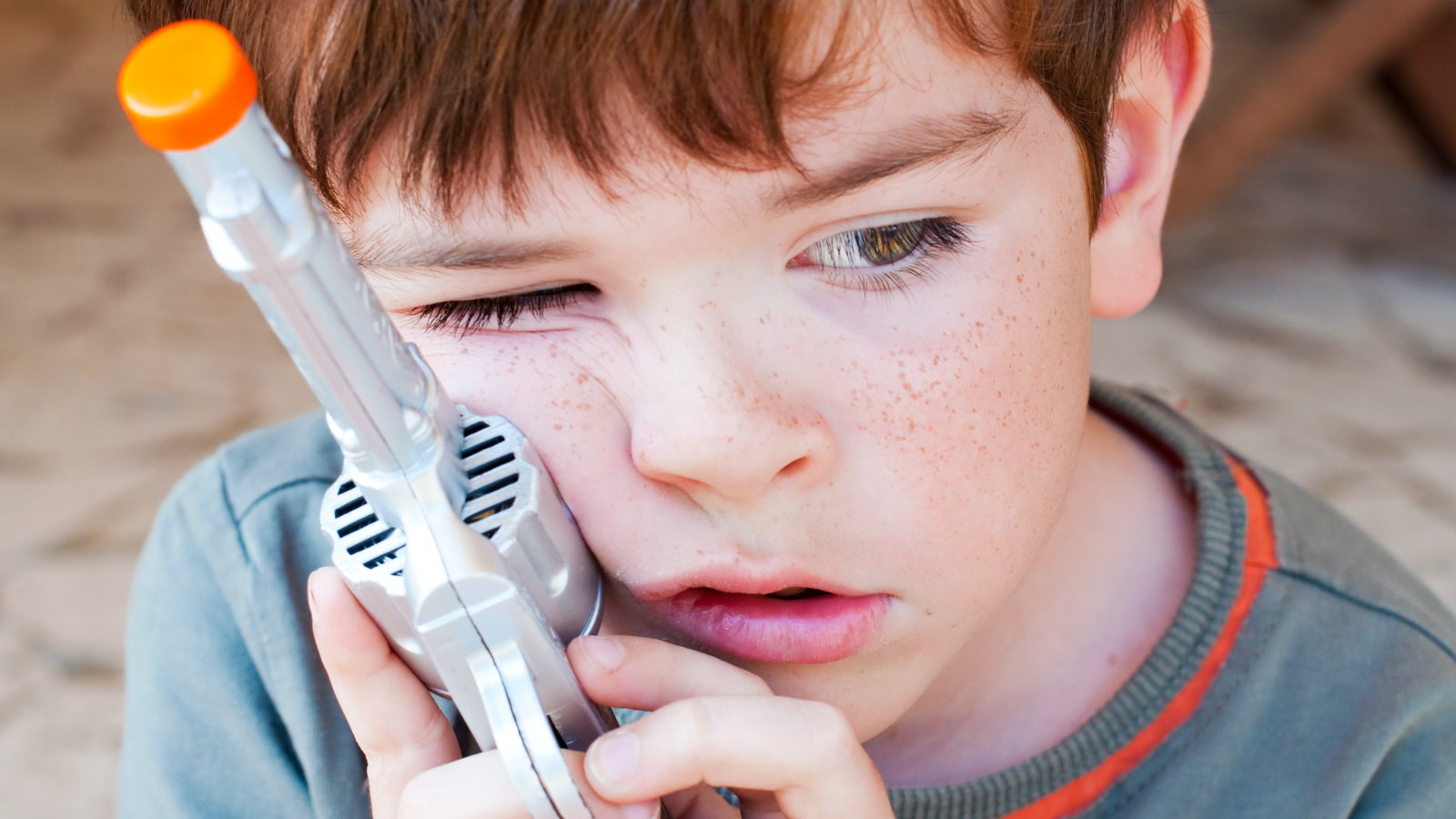 Help them understand the consequences: Make sure they know that real guns can hurt or kill people. Establish a rule that they aren't allowed to point a toy gun at a person. Then let them build a target so that they can shoot at a “monster” rather than one of their friends or siblings.

Give them a chance to meet some real-life heroes: Introduce them to your town’s policemen or firefighters. Ask if they can look inside the police car or firetruck. Let them ask questions about their weapons. And most importantly, let the policeman explain that his primary job is not to “shoot bad guys” but to keep people safe.

Have them join a pack: If your son is older and still is fascinated by gunplay, give him an outlet like Boy Scouts or Adventure Guides where he can learn about using tools resourcefully, being the “good guy,” and helping others.

In the end, most gunplay is harmless. As long as you monitor your child’s activity and make sure that he is not threatening or harming other children or animals, you probably have a typical boy on your hands. This is most likely a phase that will pass, and before you know it, he’ll be more interested in chasing after girls than in playing cops and robbers.